Introduction: Scrub typhus is endemic in eastern and southern Asia, islands of western Pacific and Indian Ocean. The causative organism is a gram-negative bacterium, Orientia tsutsugamushi. Eschar in scrub typhus helps in early diagnosis and treatment, however the eschar positivity rates vary greatly. An eschar in an acute febrile patient from tsutsugamushi triangle is an important sign. The presence of eschar and IgM ELISA positivity can be used to detect majority of scrub typhus cases.

Materials and methods: It is a hospital based observational study. This study state the epidemiologic and clinical profile of eight scrub typhus positive patients who were admitted in Base Hospital Delhi Cantonment (BHDC) during August–October 2018.

Case series and result: Fever was the chief presenting complaint among all patients. Five patients had associated myalgia, headache and two patients had abdominal pain. One patient had cough and breathlessness which required intensive care. Eschar, the pathognomic feature of scrub typhus was present in all cases. Overall, the most common area of an eschar was groin followed by the abdomen.

Conclusion: Presence of eschar is the key to clinical diagnosis of scrub.

Scrub typhus is endemic in eastern and southern Asia, islands of western Pacific, and Indian Ocean. It has been increasingly detected from various regions of India, especially the hilly regions of the Himalayas, Assam, Tamil Nadu, and West Bengal. The causative organism is a gram-negative bacterium, Orientia tsutsugamushi. The larval stage of the trombiculid mite transmits the organism to the human host through its bite. After hatching, the chiggers (infected larval mites, which feed on host) inoculate the organisms into the skin. The patient commonly presents with symptoms such as fever, headache, and breathlessness. However, the characteristic eschar is present only in a variable proportion of patients.

The presence of an eschar in a febrile patient has very high diagnostic value for scrub typhus. Scrub typhus can be complicated by hepatic, pulmonary, and cardiac involvement and meningoencephalitis. The eschar is around 5–20-mm-sized necrotic skin lesion at the site of the vector bite. Various studies have shown that the prevalence of an eschar among scrub typhus patients is 20–87%.1 However, it is frequently missed during routine physical examination because the bite of the chigger is painless, and patients often do not notice the skin lesion. We studied patients with eschar in scrub typhus to describe the importance of early diagnosis and initiation of appropriate therapy.

It is a hospital-based observational study. The authors studied the epidemiologic and clinical profile of eight scrub typhus–positive patients who were admitted in a tertiary-level defense services hospital from August 2018 to October 2018. A thorough physical examination was done followed by rapid immunochromatographic assay to detect antibodies against O. tsutsugamushi, and routine laboratory investigations, such as complete blood count, liver function test, kidney function test, peripheral blood smear for malarial parasite, urine routine examination, and culture/sensitivity and blood culture/sensitivity, were performed.

All eight patients were male defense personnel and posted in Delhi and Delhi-National Capital Region (NCR). Their mean age was 40 ± 12.5. Average duration of stay in hospital was 7 days. Fever was the chief presenting complaint among all patients. Five patients had associated myalgia and headache, and two patients had abdominal pain. One patient had cough and breathlessness on admission which required intensive care unit (ICU) care. Eschar, the pathognomic feature of scrub typhus, was present in all cases. The observed sites were groin, abdomen, nape of neck, foot, and shoulder. Laboratory tests revealed anemia in two of eight cases. Total leukocyte counts were within normal range, but thrombocytopenia was present in two cases. Raised alanine transaminase and aspartate transaminase levels were seen in seven cases. Blood and urine culture were negative. Hypotension and crackles on chest auscultation were present in one case. No other complication detected in our study. All cases were diagnosed by rapid kit test for scrub typhus, i.e. immunochromatographic assay [immunoglobulin (Ig) M and IgG antibodies]. 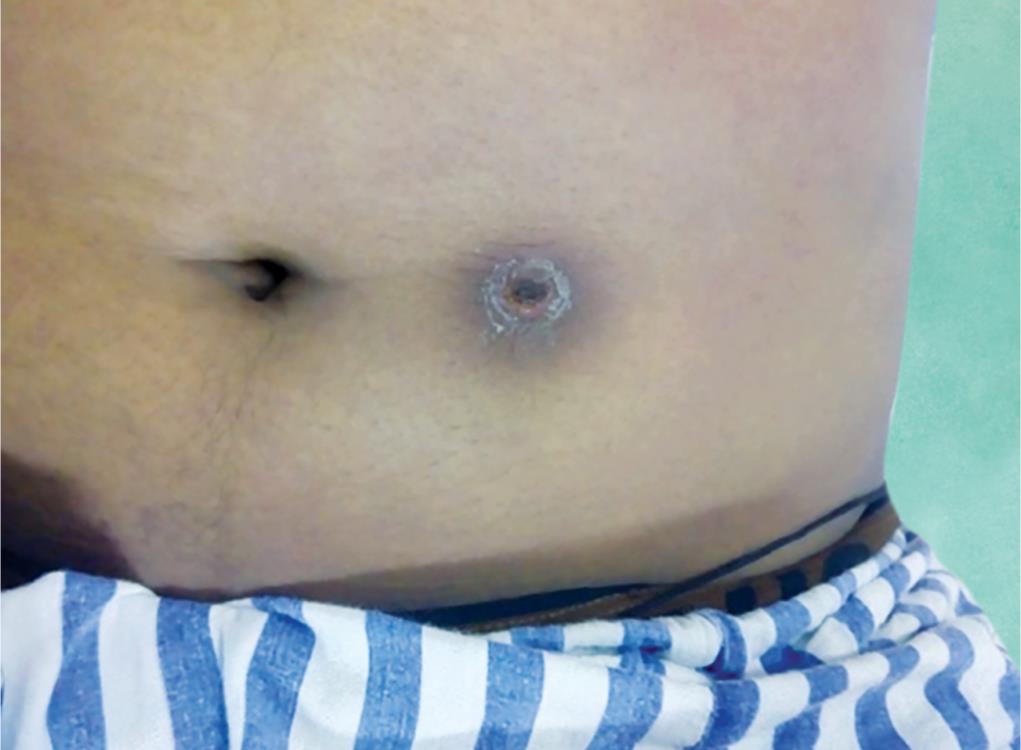 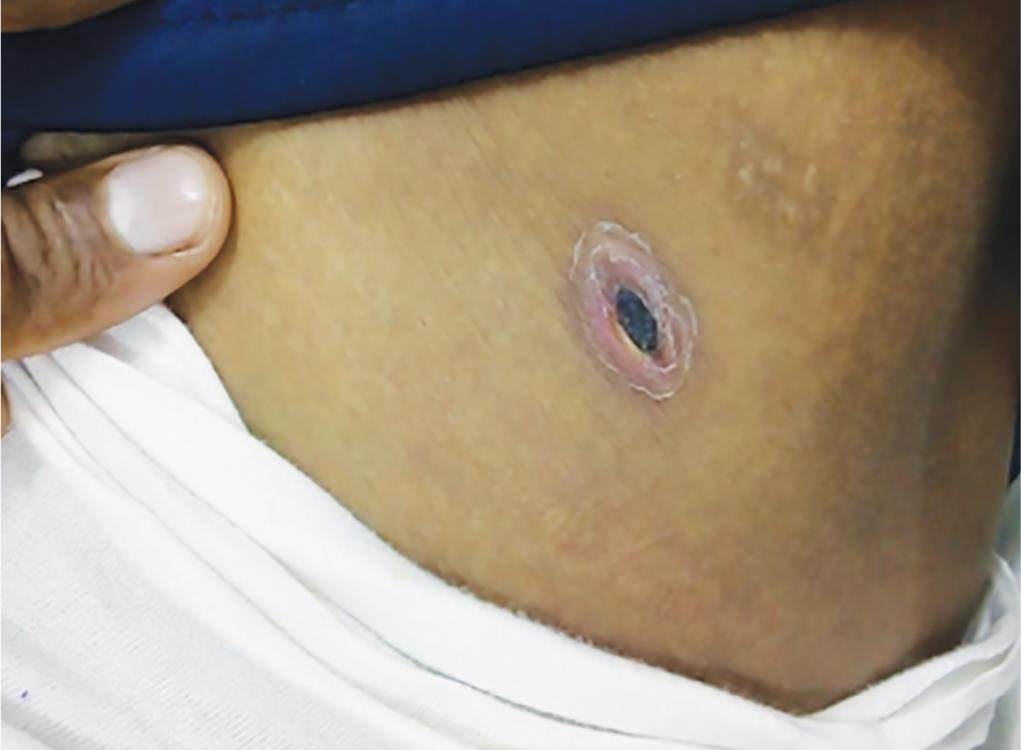 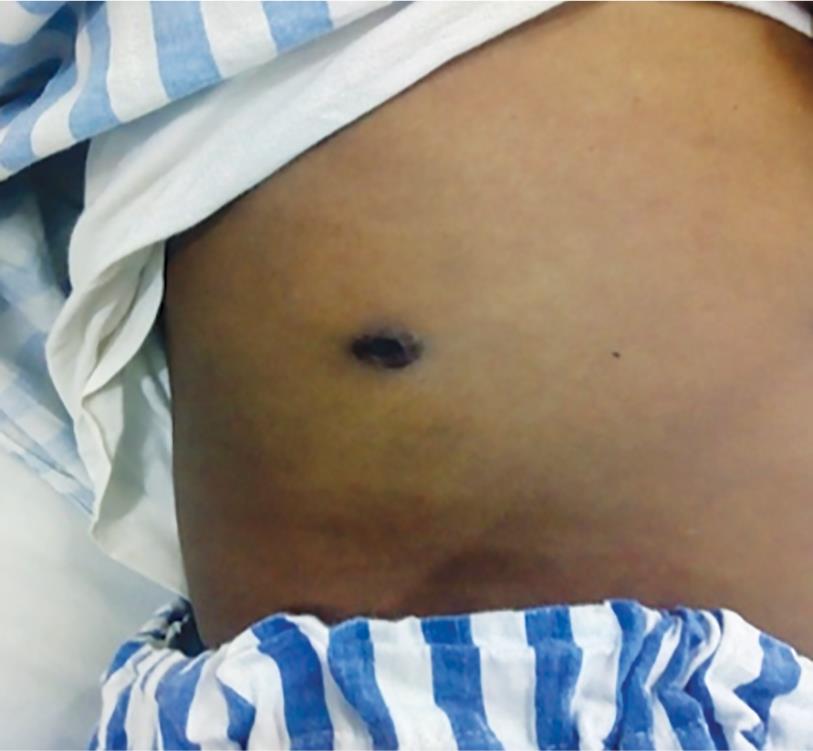 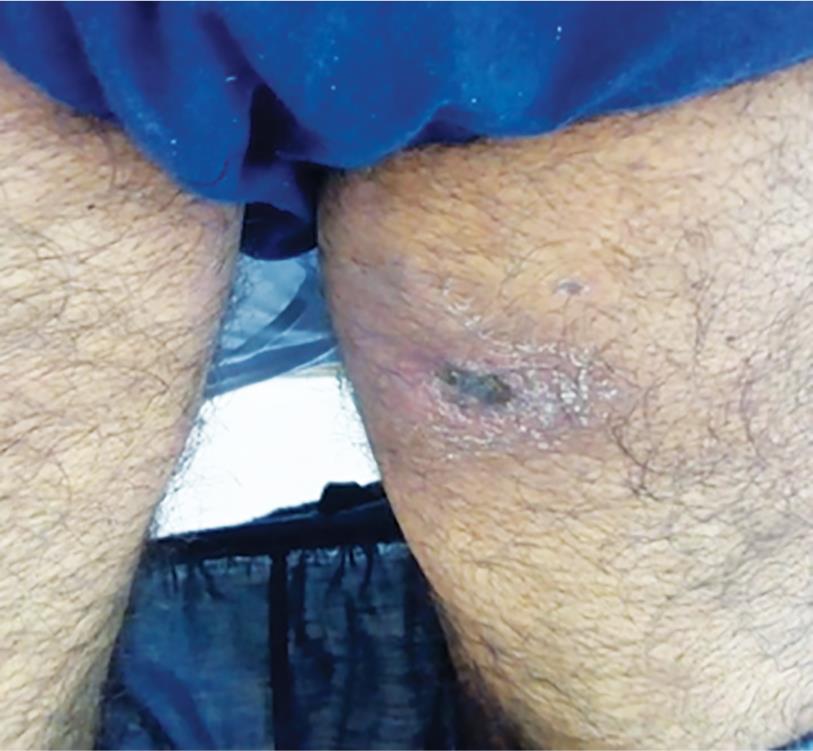 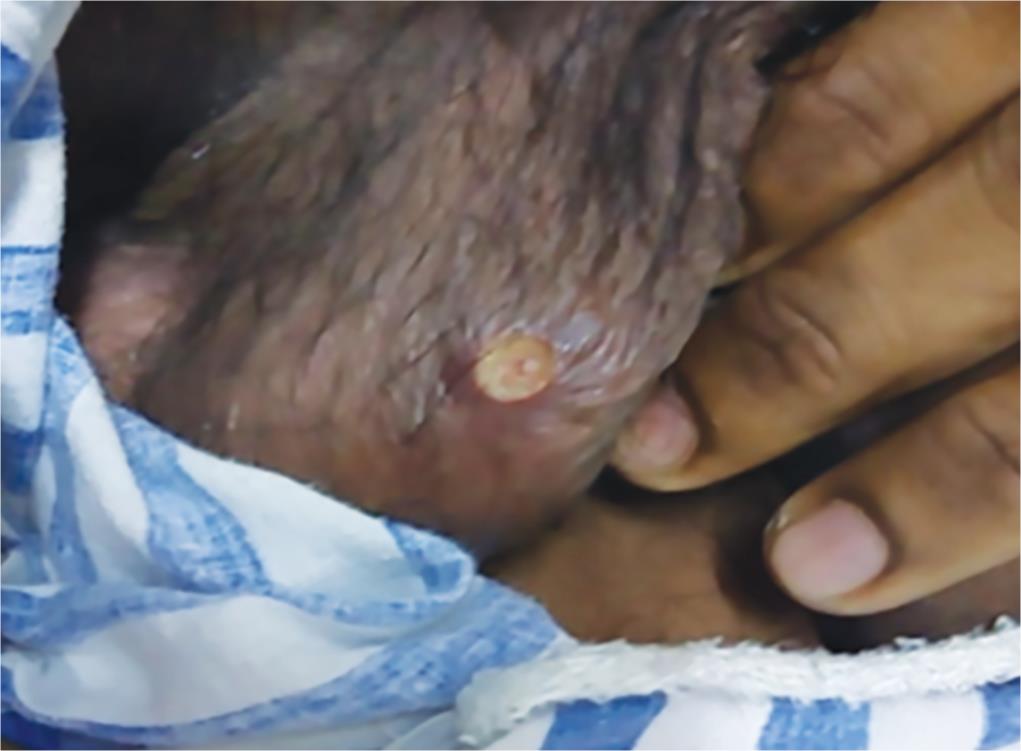 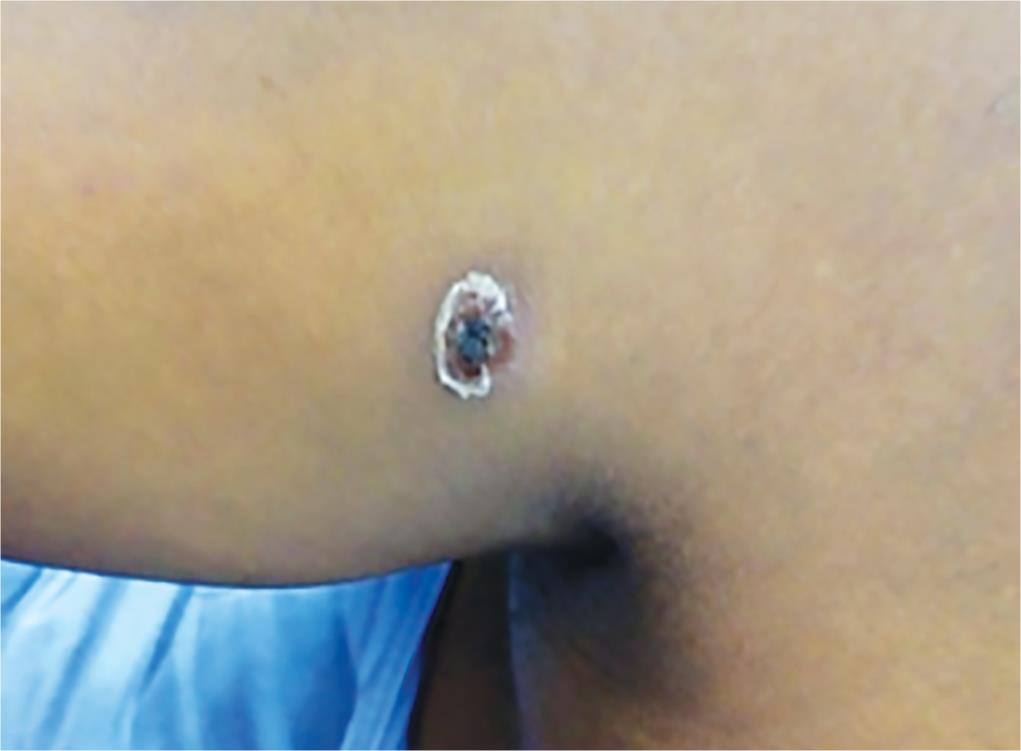 Overall, the most common area of an eschar was groin followed by the abdomen. Unusual sites for eschar included the nape of neck, shoulder, and dorsum of the foot. All eight cases of eschar were positive for rapid card test for scrub typhus, i.e immunochromatographic assay (positive scrub typhus IgM ELISA test; Figs 1 to 8). 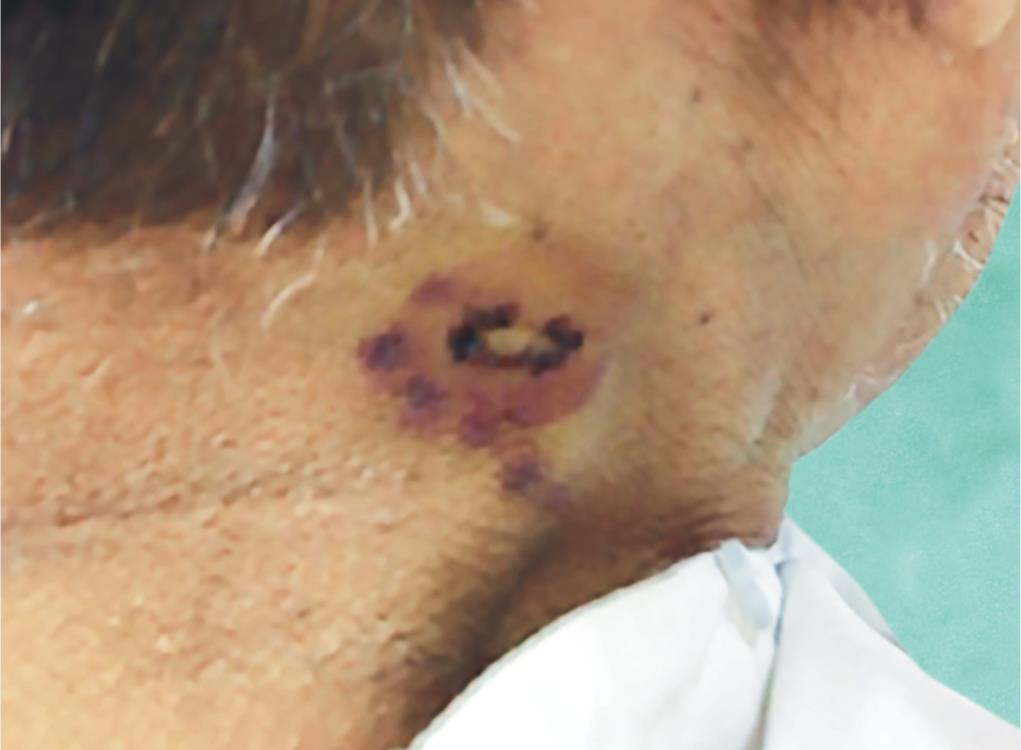 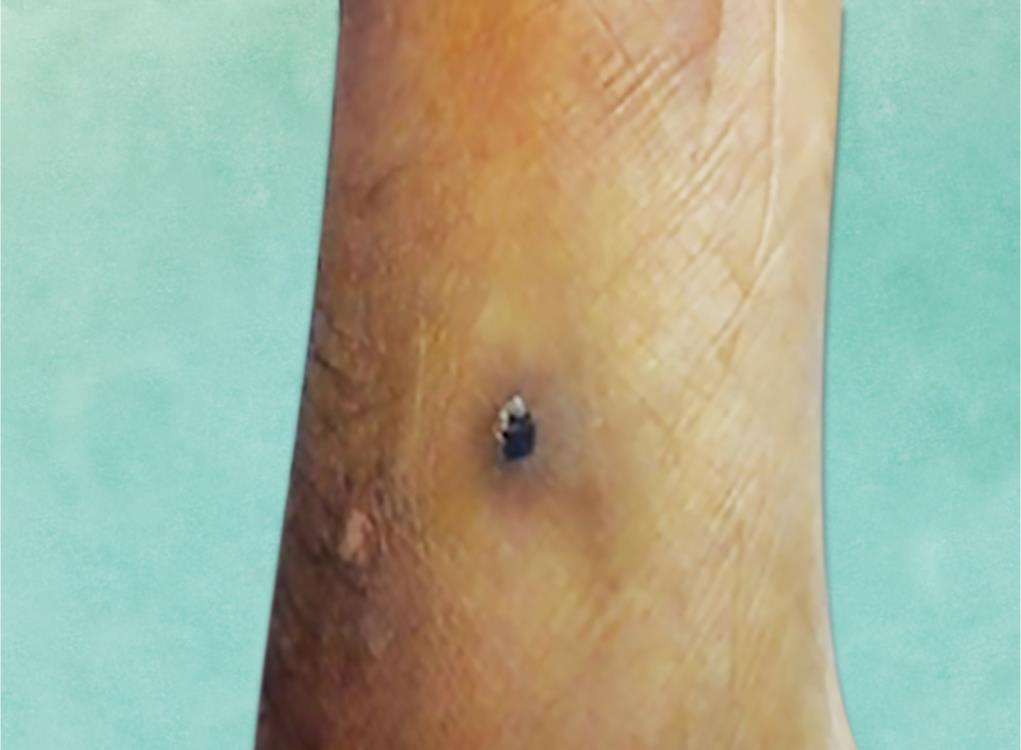 In India, scrub typhus is commonly reported in the states of Himachal Pradesh, Jammu and Kashmir, Assam, Tamil Nadu, and West Bengal. Outbreaks usually occur during rainy season in areas with bushes and grasses that are infested with mites. The causative organism is O. tsutsugamushi. Clinical scenario of scrub typhus includes high-grade fever, myalgia, eschar, and headache.2

Scrub typhus is transmitted by the bite of the larval stage of trombiculid mites (chiggers). The mites proceed through egg, larval, nymphal, and adult stages. An eschar is formed when the chigger bites while feeding on human skin.3Orientia tsutsugamushi parasitize these mites and are transmitted to humans during the bite. The bacteria multiply at the inoculation site resulting in formation of a papule. The papule gradually ulcerates and becomes necrotic and evolves into an eschar. The border of the eschar may be surrounded by a reddish erythema. The eschar usually resolves in 3 to 4 weeks without any sequelae, although sometimes it may cause scarring, hyperpigmentation, or become pruritic.4 The different pattern of distribution between males and females was noted previously.5 The eschar, a very useful diagnostic clue, and suspected patients must be thoroughly examined for its presence, especially over areas commonly covered with clothing (e.g. infra-mammary region, groin, genitalia, and axilla).

Informed consent was obtained from all the patients for using the images of the eschar sites and relevant clinical information for the purpose of the study. Names have not be published, and due efforts have been made to conceal their identities.