Exercise elicits a wide variety of hormonal responses critical for metabolism and consequent tissue growth and development. It is imperative to understand that when we exercise there are acute endocrine responses and subsequent chronic endocrine conditioning. The acute response depends upon the frequency, intensity, and duration of physical exercise. Chronic endocrine conditioning is attained after a long duration of exercises and the magnitude of this conditioning is dependent on persistence, duration, attainment of neuroendocrine responses, and skeletal muscle response which releases myokines. There is ample amount of evidence now to believe muscle as an endocrine organ. Exercise activates various molecular mechanisms in the muscle which alters various endocrine and metabolic milieu inside the muscle. This review aims to provide evidence-based narration of peculiar anabolic and catabolic hormonal responses to exercise and revisit the mechanistic explanation of this occurrence. This review has analyzed the differential endocrine adaptation in aerobic and anaerobic exercises.

The physiological and psychological advantages of regular exercise are well known for ages. Exercise elicits a wide variety of hormonal responses critical for metabolism and consequent tissue growth and development. The acute hormonal response is dependent on frequency, intensity, and duration while long-term changes in the endocrine system are a function of persistence, duration, and development of neuroendocrine responses. These neuroendocrine responses change receptor content and binding proteins which in turn alters various endocrine and metabolic responses.1 There is ample amount of evidence now to believe muscle as an endocrine organ. Exercise activates various molecular mechanisms in the muscle which alters various endocrine and metabolic milieu inside muscle.2 This review aims to provide evidence-based narration of peculiar anabolic and catabolic hormonal responses to exercise and revisit the mechanistic explanation of this occurrence. The review was prepared after searching online databases such as PubMed and Google Scholar. Keywords used for the search were exercise and endocrine, exercise and molecular changes, aerobic and resistive exercises, and sports endocrinology. This review has analyzed the differential endocrine adaptation in aerobic and anaerobic exercises (Flowchart 1).3,4

Physical activity is defined as any body movement produced by skeletal muscles that result in energy expenditure beyond resting expenditure while exercise is defined as physical activity that is planned, structured, repetitive, and purposeful and is usually aimed at improving or maintaining physical fitness. The exercise can be isotonic or isometric, either of which can be performed aerobically or anaerobically based on usage of energy, intensity, duration, repetition, and frequency.5

The other functions of hormones during exercise are the regulation of blood plasma and glucose and fat metabolism. The blood plasma volume is maintained by renin, angiotensin, and aldosterone axis and antidiuretic hormone which help in maintaining blood supply to active tissue. These adaptations ensure increased oxygen-carrying capacity and replenish water for the production of sweat. The blood glucose during exercise is affected by dietary intake, the liver release of glucose, the muscle uptake and fat metabolism during long-term exercise and is controlled by insulin during rest and glucagon, epinephrine, norepinephrine, cortisol, and growth hormone (GH) during exercise.9 The other physiological cascades affected during exercise include an increase in mitochondrial density and oxidative metabolism, increased capillary density, protein synthesis, and muscle hypertrophy involving thyroid hormone and testosterone. There is a further positive impact on lipid profile, increase in high-density lipoprotein cholesterol (HDL-C), decreased low-density lipoprotein cholesterol (LDL-C), and triglycerides. Exercise affects adipose tissue distribution, increases insulin sensitivity, improves cognitive function, and improves the ability to handle psychosocial stressors which translates into better cardiovascular health.10,11 There is improved myocardial Ca2+ sensitivity, reduction in left ventricular hypertrophy, and an increase in Ca2+ reuptake in the sarcoplasmic reticulum in skeletal muscles with beneficial effects on cardiac remodeling, myocardial contractility, and strengthening of skeletal muscles. Exercise also causes a reduction in vasoconstrictor and atherogenic endothelin-I (ET-1) and an increase in vasodilator and antiproliferative C-type natriuretic peptide (CNP).12 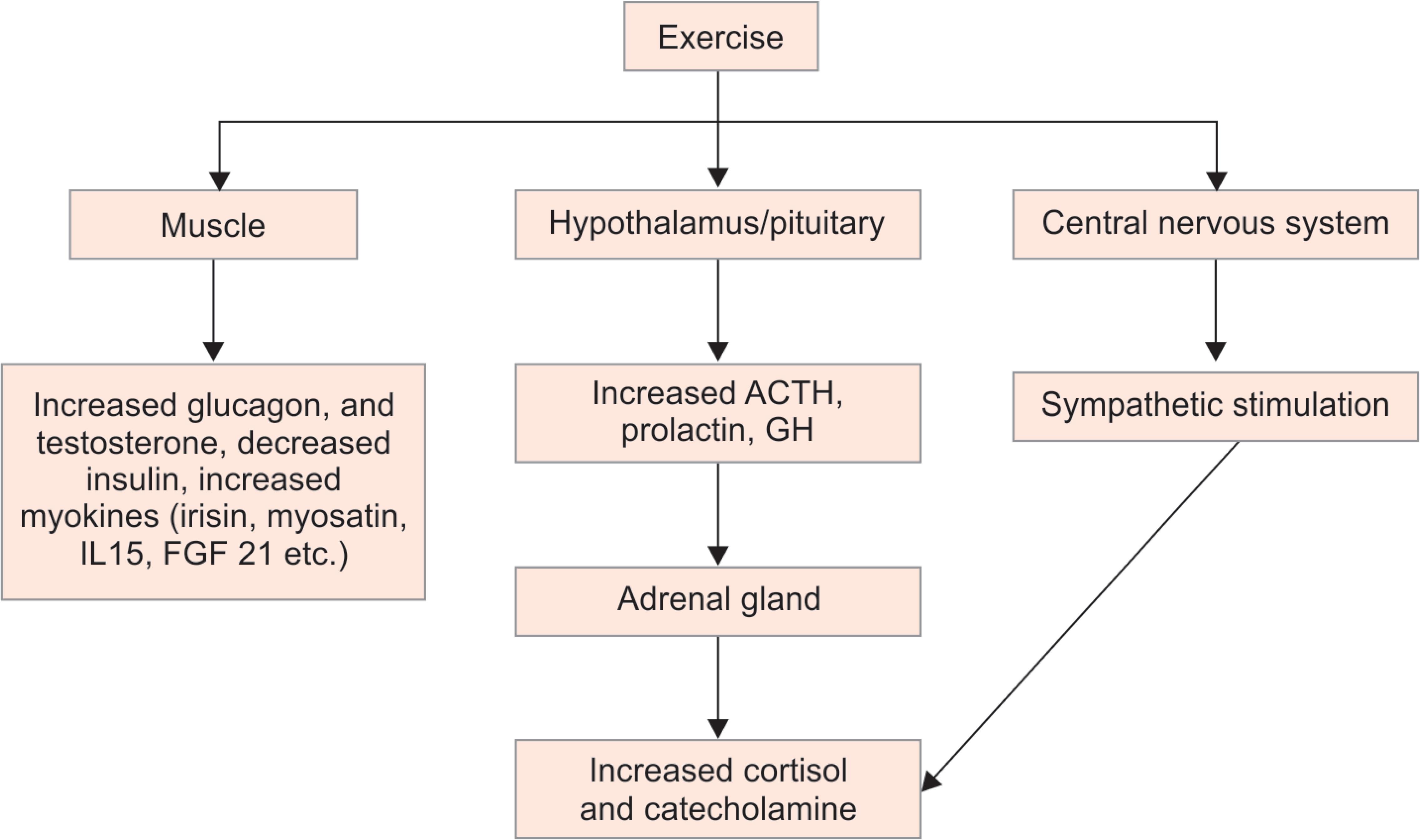 A multitude of cellular and molecular events occur during exercise involving a gradual alteration in protein mass and enzyme activities regulated by various hormones. The steroidal and thyroid hormones pass through cell membrane freely and interact with nuclear receptors where it binds with DNA, initiating transcription, and causing protein synthesis. The faster peptide hormones interact with cell membrane receptors and initiate various phosphorylation reactions mediated by second messengers. Besides, various exercise-induced epigenetic changes like the expression of different types of microRNAs, histone modification including methylation and acetylation, and DNA methylation–demethylation occur which play a key role in regulating steroid hormone biosynthesis and in the tissue-specific function of peptide hormones.1

The optimum “exercise prescription” to improve health comprises 20–60 minutes of low- to moderate-intensity aerobic exercise for 4–7 days per week (target of at least 150 minutes per week). The training of <2 days per week does not generally result in a meaningful increase in exercise capacity. The resistive exercises for the development of muscle power should include 2–3 sets of 8–12 repetitions carried out 2–3 days per week.15

Insulin is a potent anabolic hormone and its serum concentration parallels changes in blood glucose and depends on the ingestion of nutrients before and during exercise. Exercise alters the blood glucose homeostasis depending on the type, intensity, and duration of exercise and the pre-exercise blood glucose levels. Persistent aerobic exercise increases the risk of hypoglycemia during and post-exercise while resistive exercise increases the blood glucose level initially due to the release of counter-regulatory hormones followed by hypoglycemia as their levels decrease. However, both types of exercise improve insulin sensitivity and lower blood glucose. This has an important clinical role in preventive and curative strategies in metabolic syndrome and type II diabetes.17 The fasting plasma glucose is more significantly affected by resistance training than aerobic exercise while postprandial hyperglycemia, a marker of decreased endothelial function, increased oxidative stress, and inflammation is improved by the combined training group. However, both aerobic and resistance training can increase insulin sensitivity, improve abnormal lipid profile and visceral adiposity by recruiting more skeletal muscle fibers with enhanced glycogen storage capacity and expression of additional glucose transporters (GLUT4).10 Insulin has a potent upregulating effect on muscle protein synthesis with ingestion of carbohydrates and amino acids before or during resistance exercise is especially important to maximize this protein synthesis. The beneficial effects of exercise are seen with respect to cardiovascular risk factors in diabetes like changes in endothelial function, carotid artery intima-media thickness, left ventricular ejection fractions, and improvements in exercise capacity.9,14

Resistance exercise results in an increase in the blood concentrations of anabolic hormones. The primary androgen hormone, testosterone, increases in response to sympathetic stimulation and plasma volume reduction. This is more marked in men than in women (androgen remains mostly unchanged).18 This testosterone, upon secretion, interacts with skeletal muscle tissue and causes protein synthesis, increased strength, size of skeletal muscle, and increased force production potential and muscle mass.4 The effects have also formed the basis of the use of precursors of testosterone (i.e., 300 mg of androstenedione + 150 mg of DHEA) as drugs of abuse in sports. Aerobic exercises in women with polycystic ovarian disease (PCOS) offer significant benefits and are an integral part of PCOS management. However, extremely high-intensity resistive exercises may be counterproductive in PCOS by causing delayed menarche, amenorrhea, and anovulation by decreasing the luteinizing hormone (LH) levels.19

The levels of the adrenal hormone and cortisol, which has predominant catabolic effects, increase with resistive training (stimulates lipolysis in adipose cells and increases protein degradation in muscle cells) but the anabolic effects of GH and testosterone normally increase to a greater extent and reduce the negative effects of cortisol due to adaptation processes.21 The main beneficial action of cortisol during exercise is to protect glycogen stores and shift metabolism to other energy sources.22

The catecholamines especially epinephrine is released during maximal exercise and augments force production in muscles via central mechanisms and increased metabolic enzyme activity for energy generation. It also increases muscle contraction rate and blood flow to it. It enhances secretion rates of other hormones, such as testosterone.9 The plasma concentrations of catecholamines are increased by acute resistance exercise and the magnitude of its rise is dependent on muscle groups involved, strength, duration of exercise, and the rest intervals. The “anticipatory rise” is a part of the body’s psychological response before the exercise is undertaken.8

The levels of endorphins vary during exercise, i.e., rises during exercise and post-exercise reductions may be seen. The increased levels are seen more during resistive exercises than during aerobic exercises.14 The acute elevation in β-endorphins is dependent on muscle mass used, intensity, duration of resistance exercise, and rest intervals. β-endorphins are implicated in several processes like pain modulation, immune function, and assisting in glucose and lipid homeostasis. They increase the pain threshold in response to exercise training especially resistance training.23

The thyroid hormones, T3 and T4, are important for maintaining the metabolic rate and allowing other hormones to bring about their full effect, i.e., the permissive action. However, there is no significant change in levels of thyroid hormones with exercise.24 T4 (FT4) increases, T3 (FT3) decreases, and thyroid-stimulating hormone (TSH) remains unaffected in exercise and is more pronounced in calorie deficiency or ultradistance exercise and is reversed by high-calorie intake.25 The trained athletes may have increased production and turnover of T4 but baseline thyroid hormone levels do not appear to be affected substantially by chronic exercise (i.e., endurance).26

The blood volume critical for fluid homeostasis is maintained by renin, angiotensin, and aldosterone axis and antidiuretic hormone and their levels increase proportionately with exercise intensity, duration, and hydration status of an individual to maintain fluid volume within normal limits.24

Adipokines like leptin and apelin are also secreted by adipose tissue and play a role in lipid metabolism, regulation of appetite, and energy homeostasis.11

Leptin, a peptide hormone from adipose tissue, relays satiety signals to the hypothalamus to regulate appetite and energy balance, reduces testicular steroidogenesis (both as a direct effect and central by decreasing levels of LH and FSH). The resistive exercises lead to a reduction in leptin concentrations.8

Apelin promotes insulin sensitivity and lipolysis and its levels are directly proportional to insulin levels, total cholesterol, and LDL-C. The levels of apelin decrease after both aerobic and resistance exercise.3,19

Exercise elicits a range of hormonal responses responsible for cellular metabolism, facilitation of cardiovascular response to exercise and growth, and remodeling of the tissues. Exercise has been shown to improve insulin sensitivity, increase lipid catabolism, improve arterial compliance and endothelial function, and maintain muscle metabolic capacity.

7. NCT03200795. Effect of Different Exercises on Musculoskeletal Pain, Glucose Level and Quality of Life Among Patients With Diabetes. https://clinicaltrials.gov/show/NCT03200795 . 2017.