Aim and objective: The knowledge of specific contributors to mortality is crucial for the improvement of health of the community. Globally, medical certificate of cause of death is used for gathering epidemiological statistics. Our study examines the mortality pattern with sociodemographic characteristics of in-hospital deaths, which occurred at a tertiary healthcare center in Maharashtra.

Materials and methods: This study is a descriptive retrospective study in which 1,000 medical certification of cause of death forms (n = 1000) filled at a tertiary healthcare hospital between Aug 2016 and Aug 2019 were analyzed.

Conclusion: The mortality rate among males was more than twice of females and maximum deaths were observed in the geriatric age group. The chief causes of mortality overall and among both males and females individually were the diseases of the circulatory system among which, the cerebrovascular diseases accounted for highest number of cases. Overall demographic data were comparable to observations from various national and international studies.

Clinical significance: Cause-specific mortality statistics are routinely required by policy makers, researchers, and other professionals for decision-making for resource allocation, monitoring of health indicators, and identifying priorities for health initiatives. Availability of data remains limited and inadequate in many countries. Studies on in-hospital deaths are needed to identify mortality indicators in different regions and channel public health initiatives in the right direction.

The scheme of medical certification of cause of death, under the Registration of Births and Deaths (RBD) Act 1969, provides a comprehensive database to determine mortality trends in the population.1 The medical certificate of cause of death (MCCD), commonly known as the Death Certificate, is a document required by the next of kin of the deceased for registration of death.2 These are also analyzed by public health investigators to identify the demographic trends and specific causes of mortality in different regions of the country, as well as to formulate guidelines for clinical research priorities and precise allocation of funds.2 The decreasing trend in the number of pathological autopsies conducted makes the MCCD key source of information of the cause of death.3 Concise, accurate, and complete MCCD, which documents the immediate, antecedent, and underlying cause of death, serves as a crucial statistical data source in determining the mortality trends.4 This helps in gathering mortality data that are comparable over time and for populations across the globe.5 Although the knowledge of specific contributors to mortality is crucial for the improvement of community health, sources of such data remain limited and inadequate in many countries. Periodic review of morbidity and mortality data in medical institutions of these regions can not only provide valuable information for resource allocation and formulation of guidelines for health services but can also aid these establishments in recognizing loopholes and deficiencies in patient care, enabling them to undertake dedicated measures in reducing the overall burden of diseases.6

In-hospital mortality is affected by several factors for which physicians and hospital might have no control over. Unavailability of population-based statistics makes hospital-based studies a suitable alternative to provide correlates. This study, therefore, examines the mortality pattern with sociodemographic characteristics of in-hospital deaths, which occurred in a tertiary healthcare center in western Maharashtra.

In the present study, MCCDs of in-hospital deaths occurring at a tertiary care hospital in western Maharashtra from Aug 2016 to Aug 2019 were included. It is a descriptive retrospective study. No sampling was done. The standard format used for medical certification of cause of death for in-patient deaths confers to the guidelines given by the World Health Organization and rules made by the Indian government. Causes of in-hospital deaths were certified by attending physicians or residents. Necessary permission was taken from the institutional ethical committee. The data collected included the primary causes of death (classified according to the International Classification of Diseases–10) as well as the demographic information such as age, sex, and period of hospitalization. The MCCD forms were collected from the statistics section of the hospital. These were scrutinized for accuracy and completeness. Unnatural deaths, sudden deaths, and cases where the cause of death was uncertain as well as the cases where the MCCD was incompletely or wrongly filled were excluded from the study. One thousand MCCD forms (n = 1000) filled at the tertiary care hospital between Aug 2016 and Aug 2019, meeting the inclusion criteria, were included in the study. Data analysis was performed using the SPSS-20 software. The results were studied using appropriate statistical methods. Microsoft Word and Excel were used for generating charts and graphs. Extreme care was taken to ensure the confidentiality of all data. The 10th version of the International Classification of Diseases (ICD-10), which is globally used for identification of health trends and mortality and morbidity statistics, was used in the present study.7

Majority of the deaths were caused by “diseases of the circulatory system” (23%, n = 230), among which, the cerebrovascular diseases accounted for the highest number of cases (46.9%, n = 108), followed by ischemic heart diseases (19.1%, n = 44). The group of diseases relating to “neoplasm” was the second leading cause among the total medically certified deaths, accounting for 15.3% (n = 153) of the cases. Among these, “malignant neoplasms of lymphoid, hematopoietic, and related tissue” constituted the maximum number of cases (37.2%, n = 57).

Medical certificates of cause of death are valuable source for mortality statistics. With all of its imperfections, MCCD continues to be the key document used in describing the distribution and causes of death by age, sex, race, and other demographic characteristics. We have presented a descriptive retrospective study of 1,000 cases of hospital deaths, recorded at a tertiary healthcare center in western Maharashtra, in which we analyzed the various cause-specific mortality trends and demographic variability (Fig. 5).

The global burden of diseases is slowly shifting to noncommunicable chronic lifestyle diseases and a similar effect is also seen in our country.14 There is an upward trend in the role of noncommunicable diseases in causing deaths due to many reasons such as a change in lifestyle, behavior, and stress levels.15 Cardiovascular diseases are now the most blameworthy reasons for mortality and morbidity globally.14 Our study also revealed that among the total deaths recorded, most deaths were caused due to “diseases of the circulatory system,” accounting for 23% (n = 230) of the total deaths. Similar findings were seen in studies done by Kauser et al. and Alexander et al.12,16 Among these, deaths due to cerebrovascular accidents (46.9%, n = 108) and ischemic heart diseases (19.1%, n = 44) were the chief causes, as also observed in other studies.17,18

The “neoplasms” (15.3%, n = 153) formed the second-largest mortality cause group in our study; a similar observation was found in the study IHME, Global Burden of Diseases, which designated “cancers” as the second leading cause of deaths globally in 2017.19 This observation is in contrast to various national studies where the incidence of “neoplasms” in causing deaths was found to be relatively lower.7–9 The higher percentage observed in our study can also be attributed to the fact that the center of the study was a tertiary healthcare referral center with a dedicated cancer unit and palliative care. 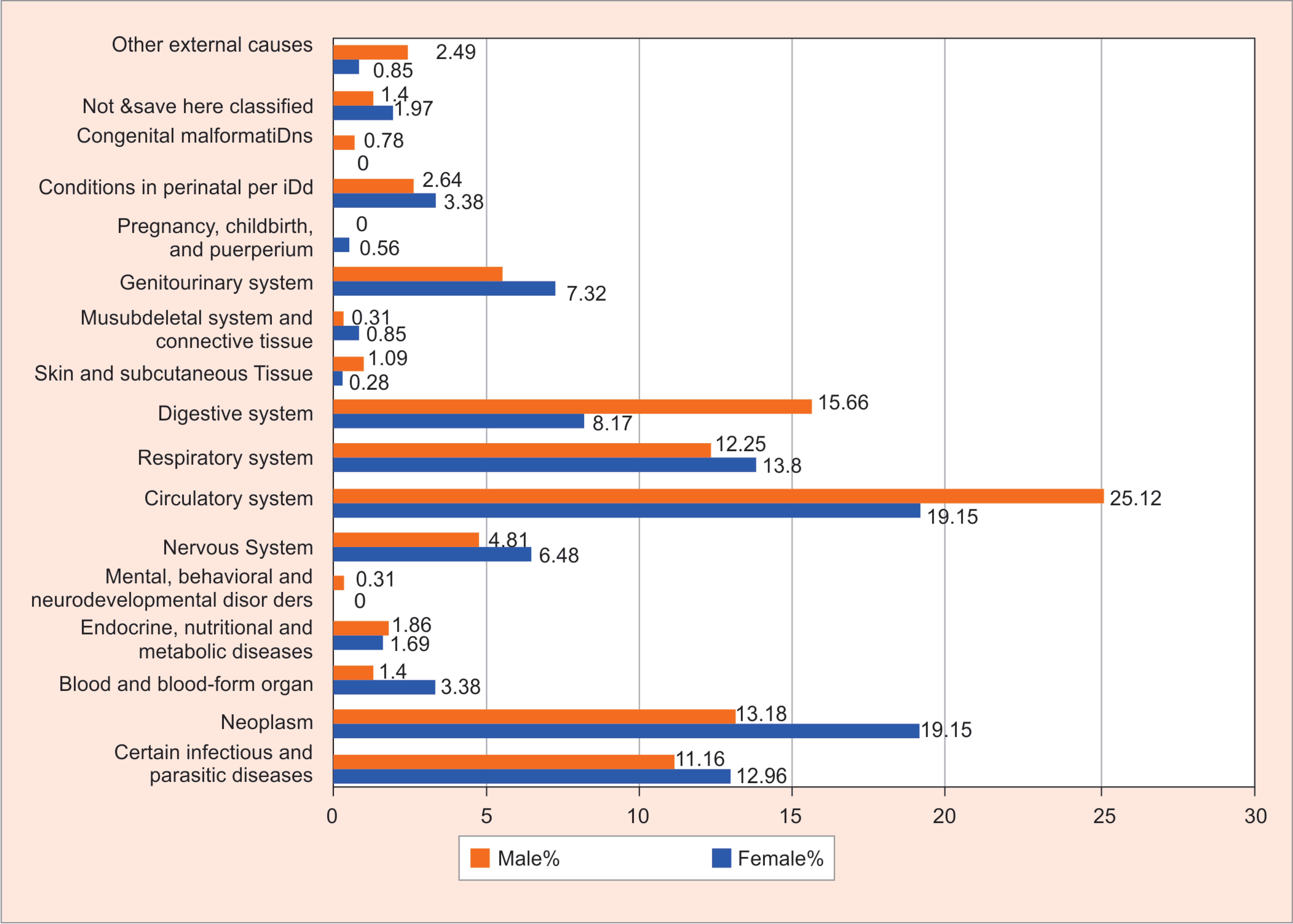 Fig. 2: Sex distribution for cause of death 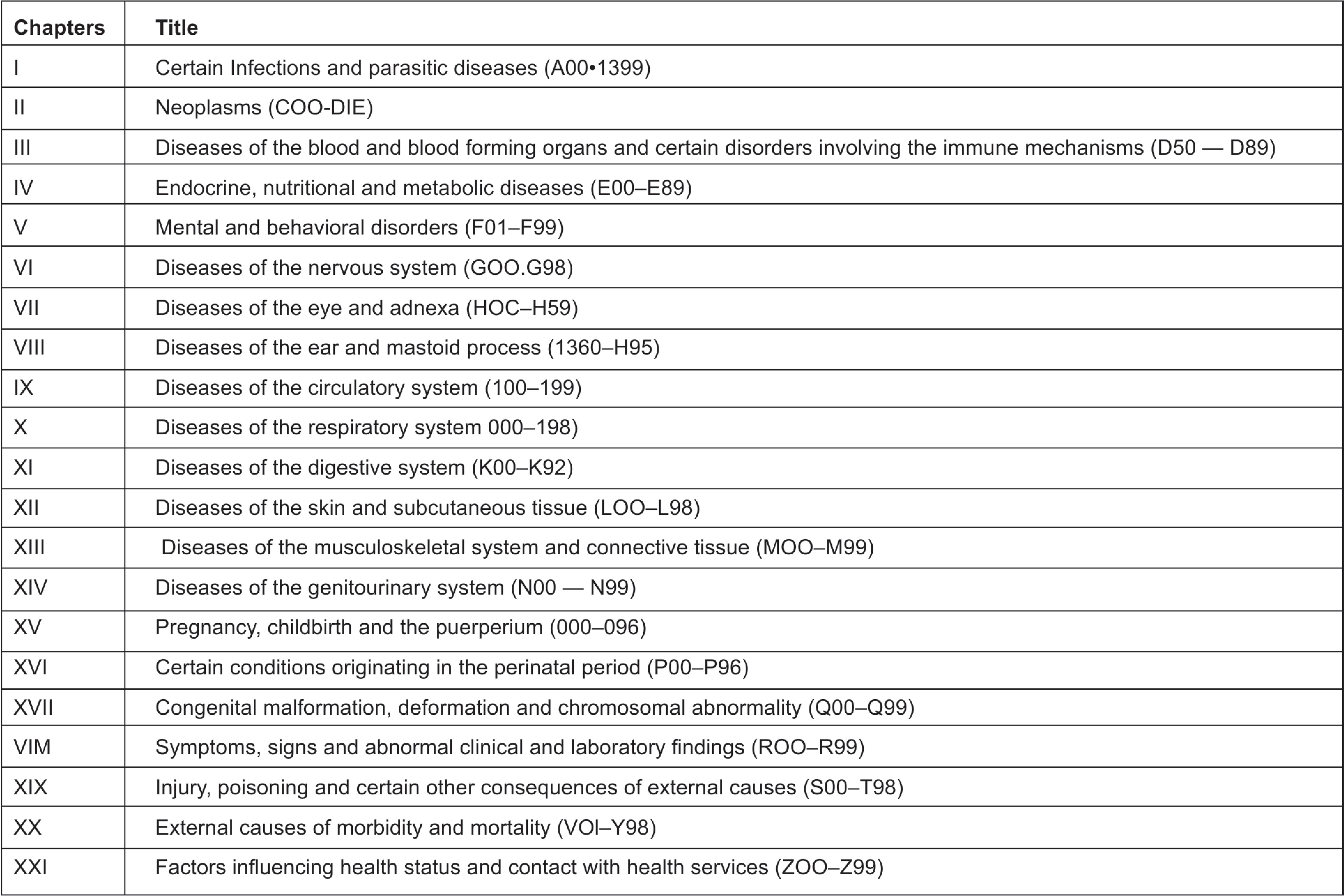 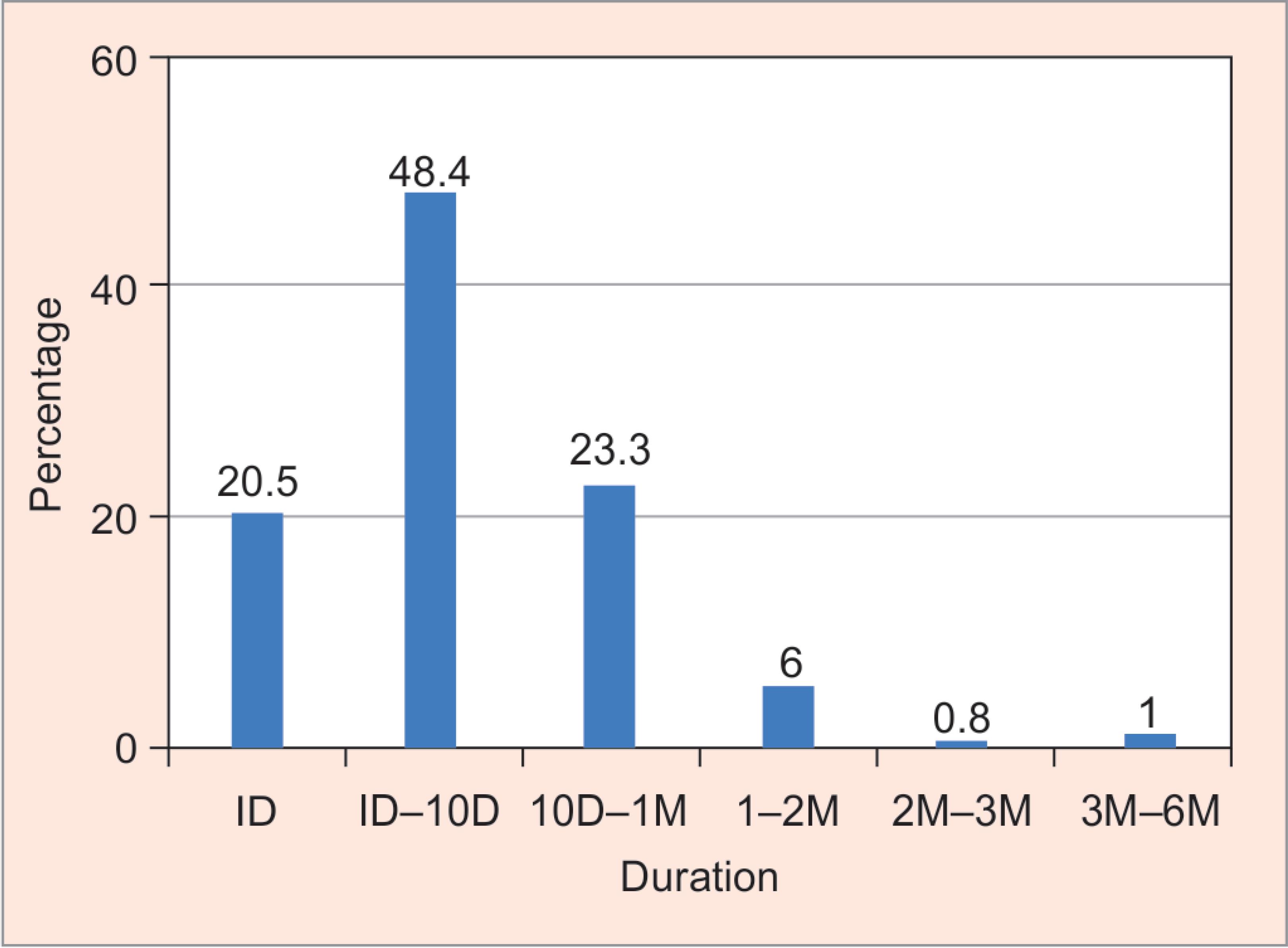 The study showed that most deaths (48.8%, n = 484) occurred between 1 day and 10 days of admission, findings comparable with Hall et al.13 Considering the time of death, it was observed that there were no significant diurnal variations in deaths occurring in hospital-admitted patients. However, small peaks of increase in the number of deaths were seen between 0700 hours and 0800 hours, 1200 and 1400 hours, and 1900 and 2000 hours. This finding was comparable to that found by Flaatten et al.,20 which also showed a rise in deaths during hours of the transition of shifts and mealtime. Inculcating more alertness and caution as well as increasing the availability of staff during these hours may help in reducing chaos and mortality, especially during these hours.

Our study showed that the mortality rates among males were almost twice as much as females and maximum deaths were observed among the geriatric age group. The chief causes of mortality overall and among both males and females individually were the diseases of the circulatory system. About half of the deaths recorded occurred from 1 to 10 days of admission. Overall demographic data were comparable to observations from various national and international studies.

The analysis of mortality trends forms the basis for evidence-based epidemiological evaluations, which are subsequently used to assess the impact of public health interventions, and set disease control priorities at national and international levels. As someone rightly said, “What gets measured gets done.” The medical certificates of cause of death serve as crucial statistical data sources in determining the cause-specific mortality statistics and demographic trends. More such studies on in-hospital deaths with greater sample size are needed for the pattern of mortality and to look at the relevance of our finding within the context of a larger community.

Fig. 5: Percentage of cases dying at different hours of the day

Since the study is a retrospective record-based study, some information was not available for inclusion in the study. The study also depended on the accuracy and completeness of the MCCDs, which were filled by different doctors; therefore, subjective variations in the diagnosis and determination of mortality causes could exist.

18. Vital Statistics Division, Ministry of Home Affairs, Government of India (2018) Report on Medical Certification of Cause of Death, Government of India, Office Of The Registrar General, India, https://censusindia.gov.in/ [ 2017, Accessed 20 Aug 2019].