Aim and objective: To estimate the prevalence of ocular morbidity among primary schoolchildren in Delhi area.

Materials and methods: This was a descriptive cross-sectional study. The study was conducted among primary schoolchildren of age group 5–12 years in Delhi area. A total of 1,100 school-going children were evaluated. After questionnaire administration, visual acuity, examination of anterior and posterior segment structures of the eyes of the children were carried out. For the statistical analysis, children were divided into three groups: group I (5–7 years), group II (8–10 years), and group III (<12 years) based on age.

Conclusion: A high prevalence of ocular morbidity among schoolchildren of age group 8–10 years was observed. Refractive errors were the most common ocular disorders. This study emphasized that a simple school visual screening program is effective for the early detection of ocular problems.

It is estimated by studies that globally people with visual impairment is 253 million, among which 217 million have moderate-to-severe visual impairment. Among 19 million children under the age of 15 years, visual impairment due to undetected or inadequately corrected refractive errors accounts for 12 million.1

A poor academic performance is seen in children having undetected ocular disorders and leads to severe ocular disability later in life.2 Visual screening program of children benefits by providing early and suitable preventive ophthalmic care to the target population. It is confirmed by several community-based studies that approximately 75% of all vision-related problems in children were first identified at a visual screening program.3

Generally, children are not aware of their ocular problems unless specifically examined. Children tend to adopt compensatory methods for adjusting to the poor vision by sitting near the blackboard, holding the books closer to their eyes, and squeezing the eyes.4,5 A statistical data on causes and prevalence of ocular morbidity in children are essential for offering preventive and curative services in children.6 These ocular morbidities can be prevented by early detection and treatment.

The significant data for the study of preventable blindness fall in the schoolchildren of age group (6–16 years) accounting for 25% population in developing countries. Schools provide the best platform for imparting health education to the children. This study was carried out with the objective of estimating the prevalence of ocular morbidity among primary schoolchildren.

This is a cross-sectional study conducted among primary schoolchildren in Delhi area. The study was conducted in full accord with the tenets of the Declaration of Helsinki after obtaining approval from the Institutional Ethics Committee. Children attending Air Force schools in the age group of 5–12 years were included for the evaluation. The school management committee was informed in prior and permission from parents was as taken. Consent forms and questionnaire were distributed to all the primary schoolchildren. The questionnaire included any voluntary disclosure of significant ophthalmological history by parents.

The survey was conducted by history taking from the children, teachers, and from voluntary disclosure by parents in consent form. Examination was carried out in clean, quiet, and well-lit rooms within the school campus. Assessment of both aided and unaided visual acuity (VA) was performed using Snellen’s chart. A pinhole VA was tested for children with VA less than 6/9. Refractive error was diagnosed when a VA worse than 6/9 improved on a pinhole test. As per WHO classification, visual impairment was defined as presenting VA worse than 6/9 in the better eye and classified into mild (6/12–6/18), moderate (<6/18–6/60), and severe impairment (<6/60–3/60).7 Blindness was defined as best-corrected VA worse than 3/60 in the better eye.1,8,9 A dry retinoscopy and subjective refractive error correction were given to the children. Children were checked for ocular movements and convergence insufficiency using Royal Air Force ruler (RAF). A detailed anterior segment examination was performed using a torch light and a slit-lamp. Color vision was tested in broad daylight using 32 plates Ishihara charts. Visual axis alignment was checked using cover–uncover, alternate cover, and Hirschberg tests. Undilated fundus examination was performed using a direct ophthalmoscope. Children not improving to 6/6 with a pinhole and needing further assessment and management were referred to a tertiary care center.

The prevalence of ocular morbidities seen in the children is tabulated in Table 1 and depicted in Figure 1. The refractive errors were VA improved with a pinhole testing accounted for 282 (25.6%) followed by convergence deficiency accounting for 20 (1.8%) of ocular morbidity. Color vision defect was responsible for 10 (0.9%) of ocular morbidities, and 3 (0.27%) were due to squint with no cataract and glaucoma cases. 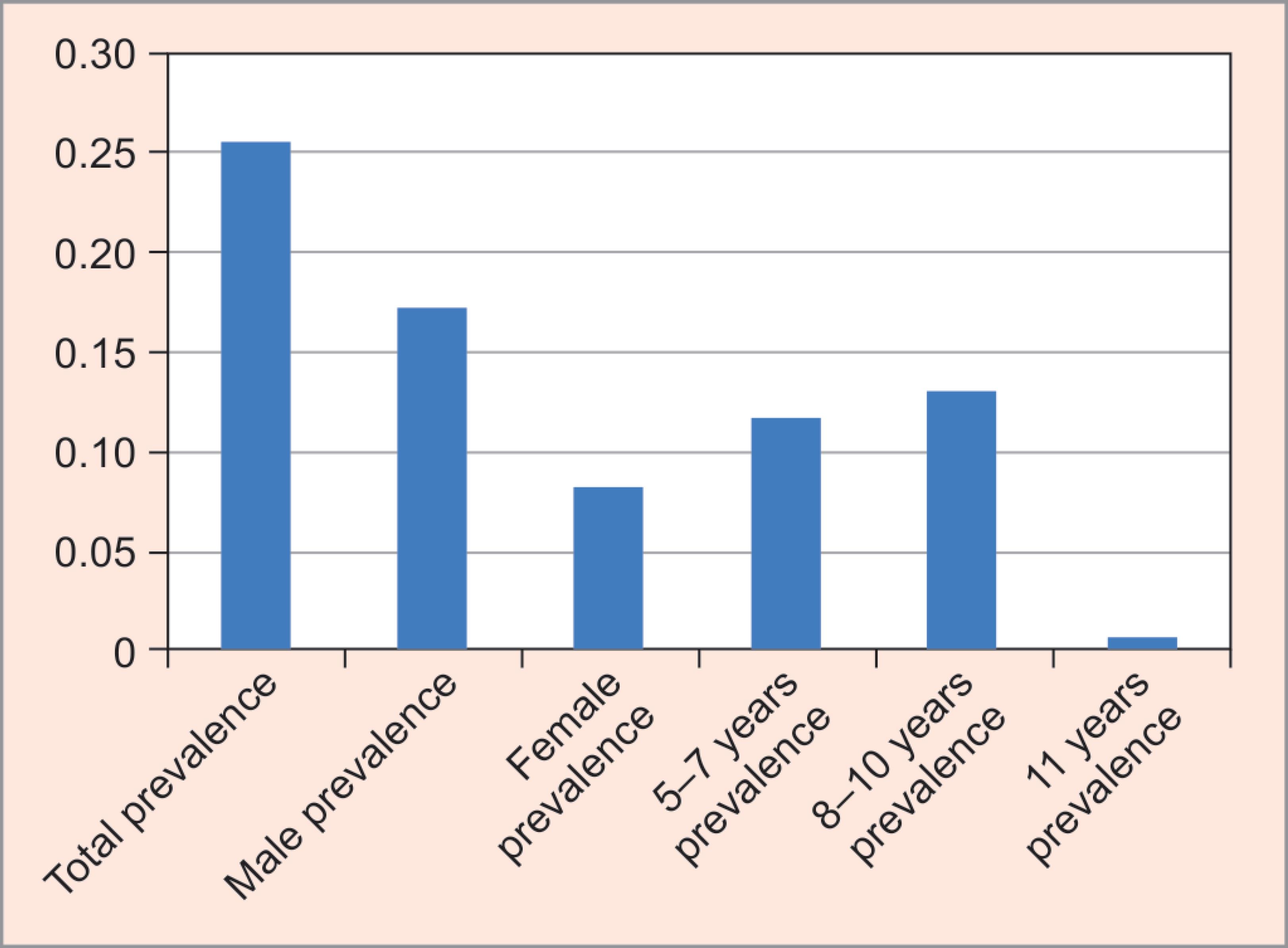 Lower prevalence of refractive errors (2.7–5.8%) has been reported internationally among children of age 5–15 years from Africa, Finland, Chile, and Nepal as compared to the present study.14 These differences may be explained by the geographical variations in the prevalence of refractive errors, different lifestyles followed, medical care received, and different diagnostic criteria used in the studies.

The difference in the prevalence of ocular morbidities among boys (34%) and girls (21.4%) was due to the higher prevalence of refractive error in boys (30.4%) than girls (19.3%). The prevalence of red–green color deficiency was found to be 1.6%, which was comparable to results reported by Gupta et al.3 (2.3%) in their study. The frequency of color vision defects is higher among male children, which corroborate that genetically color vision is X-linked recessive nature.

The ocular morbidity was more in the group II (8–10 years) compared to group I (5–7 years) and group III (<12 years), which was comparable with a study conducted by Kumar et al.7 Among older children, this could be attributed to the increase in awareness with age, which enables them to communicate their problems to the doctor in a better way which in turn leads to higher reporting of ocular problems.

Refractive error is the most common cause of treatable ocular morbidity according to our study. This study emphasized that a simple school visual screening program is effective for the early detection of ocular problems. Schools form a suitable platform where mass communication and awareness can be imparted. The early detection of color vision defects and counseling of parents and children guides them in choosing a suitable academic career. Hence, there is a need for early evaluation and treatment of visual impairment before the vision and academic performance of children is affected. Limitations of the study include the smaller sample size of participants in group III (<12 years).