Thoracic Paravertebral Block as an Alternative to General Anesthesia in Patients with Hypertrophic Cardiomyopathy for Elective Breast Surgeries: A Case Series Study

Hypertrophic cardiomyopathy (HOCM) is a cardiac disease characterized by asymmetric hypertrophy of the interventricular septum (IVS), causing intermittent obstruction of the left ventricular outflow tract (LVOT). Sympathetic stimulation during general anesthesia (GA) in HOCM patients poses the risk of sudden intraoperative death. It is pertinent to appreciate that surgery and anesthesia often complicate the perioperative outcome if adequate monitoring and proper care are not taken. Therefore, a complete understanding of the pathophysiology, hemodynamic changes, and anesthetic implications of HOCM is required for a successful perioperative outcome. Regional anesthesia using paravertebral block (PVB) provides an excellent alternative to GA in HOCM patients undergoing carcinoma breast surgery. We hereby describe the perioperative management of three patients of HOCM, with PVB as the preferred anesthetic modality, which resulted in excellent intraoperative conditions with adequate postoperative analgesia and negligible hemodynamic alterations.

Hypertrophic cardiomyopathy (HOCM) is a genetic autosomal dominant cardiac disorder characterized by asymmetric hypertrophy of the intraventricular septum, which results in an asymmetric obstruction to the outflow tract of the left ventricle. When such patients are administered GA, the sympathetic stimulation caused during intubation may lead to a decrease in preload and after-load to the left ventricle, leading to angina pectoris, syncope, tachydysrhythmias, congestive heart failure, and at times, sudden death. Conventionally, breast surgeries are performed under general anesthesia (GA) and require endotracheal intubation. However, on a literature search, it was found that regional anesthesia using paravertebral block (PVB) is an ideal alternative to GA for carcinoma breast surgery. 1 Thoracic PVB involves injection of local anesthetic (LA) solution at the point of emergence of spinal nerves from the intervertebral foramen. The PVB space contains both the dorsal and ventral rami, and sympathetic chain. Therefore, infiltration of this space results in unilateral sensory, motor, and sympathetic blockage, thereby preventing the deleterious effects associated with GA in HOCM patients. Additional benefits of PVB include reduced postoperative nausea/vomiting, prolonged postoperative pain relief, and increased potential for ambulatory discharge. 2 Apart from ensuring safer anesthetic management of the patient, PVB also provides the advantage of providing better analgesia during the post-operative period for patients undergoing breast surgery. 2 However, data describing the successful anesthetic management of HOCM in breast surgery is limited.

A 60-year-old nondiabetic, hypertensive woman with invasive ducal carcinoma of the right breast was scheduled for breast conservation surgery. Her comorbidities included HOCM with severe left ventricular outflow tract (LVOT) obstruction with dyspnea (grade II) and inferolateral wall ischemia on electrocardiogram (ECG). Her 2D echo revealed a left ventricular ejection fraction (LVEF) of 81% and an LVOT gradient of 58 mm Hg. She was accepted under the American Society of Anaesthesiology (ASA) grade III after a thorough clinical examination.

An 81-year-old woman, weighing 45 kg, diagnosed as a case of carcinoma of the left breast, was posted for modified radical mastectomy. During a preanesthetic evaluation, a pan-systolic murmur was appreciated at mitral, tricuspid, and aortic areas. The ECG revealed atrial fibrillation with controlled ventricular rate, left ventricular hypertrophy (LVH) on voltage criteria, and left bundle branch block. Bedside 2D echo by Fast Assessment Diagnostic Echocardiography (FADE) protocol revealed concentric LVH with asymmetric septal hypertrophy, with LVEF of 70%, and turbulent flow across the AV valve. The case was then evaluated by a cardiologist before surgery, diagnosed as HOCM, and immediately started on beta-blockers. The patient was accepted in ASA-III and taken up for surgery.

A 68-year-old woman, weighing 50 kg, diagnosed as a case of carcinoma left breast was posted for lumpectomy with axillary dissection. She was a known case of chronic kidney disease and HOCM with mild mitral regurgitation. Her 2D echo revealed severe concentric LVH, presence of systolic anterior motion defect of an anterior mitral leaflet, LVEF–75%, interventricular septum (IVS)/PW thickness ratio of 1.2, and LVOT gradient of 80 mm Hg. Owing to her high potassium level (6.6 mmol/L), the patient underwent urgent hemodialysis before surgery. She was accepted in ASA-III and taken up for surgery.

In view of cardiac status, thoracic PVB block was planned for all three surgeries. A detailed explanation of the anesthetic procedure was done and written informed consent was obtained from the patients. Intravenous access was established using 1 mL of LA, with 18 G cannula, and all patients were attended in sitting position. With the patient in the sitting position, ultrasound-guided thoracic PVB was performed on the operative side at thoracic (T) levels T3 and T4. A 7.5–12 MHz transducer was used for all blocks. Before each puncture, we administered local anesthesia with 2 mL of lidocaine 2%. The PVB was administered with an 18 G Tuohy needle, utilizing an out-of-plane approach with the probe oriented longitudinally, parallel to the spinal cord at the level of the transverse process (Fig. 1). Once the transverse processes were identified, the needle was inserted out-of-plane to contact the transverse process and was then walked off the transverse process in a caudocranial direction penetrating toward the parietal pleura. Displacement of the parietal pleura represented the correct placement of the block needle. At each level, 15 mL of 0.25% bupivacaine were administered. Paravertebral block catheter was also inserted to supplement the block intraoperatively and to ensure postoperative analgesia by top-ups. Adequacy of the block was checked by sensory loss in the surgical field in the form of insensitivity to cold and pinprick sensations. A surgical incision was made about 20 minutes after completion of the block and standard monitoring was attached. Hemodynamic parameters were maintained within 20% of the baseline throughout the surgery. All three surgeries lasted for 2–3 hours and visual analog score (VAS) scores were 0 and 2 at the end of surgery and after 3–4 hours post-surgery, respectively. Postoperative analgesia was achieved with paracetamol infusion and PVB top-up.

Thoracic PVB is a useful alternative anesthetic and analgesic technique for breast surgery. The administration of bupivacaine in PVB space in the form of multiple injections at various consecutive cervical and thoracic levels is successful in providing adequate analgesia for breast surgery. Pusch et al. described a single injection of a high volume of bupivacaine in thoracic PVB and reported effective anesthesia for breast lump excision as well as mastectomies with axillary clearance. 3 Thoracic PVB also provides better hemodynamic stability, reduces blood loss, and provides superior postoperative pain control than any conventional technique. Although it is an invasive procedure, recent reviews have demonstrated it to be a safe technique for use in various circumstances. 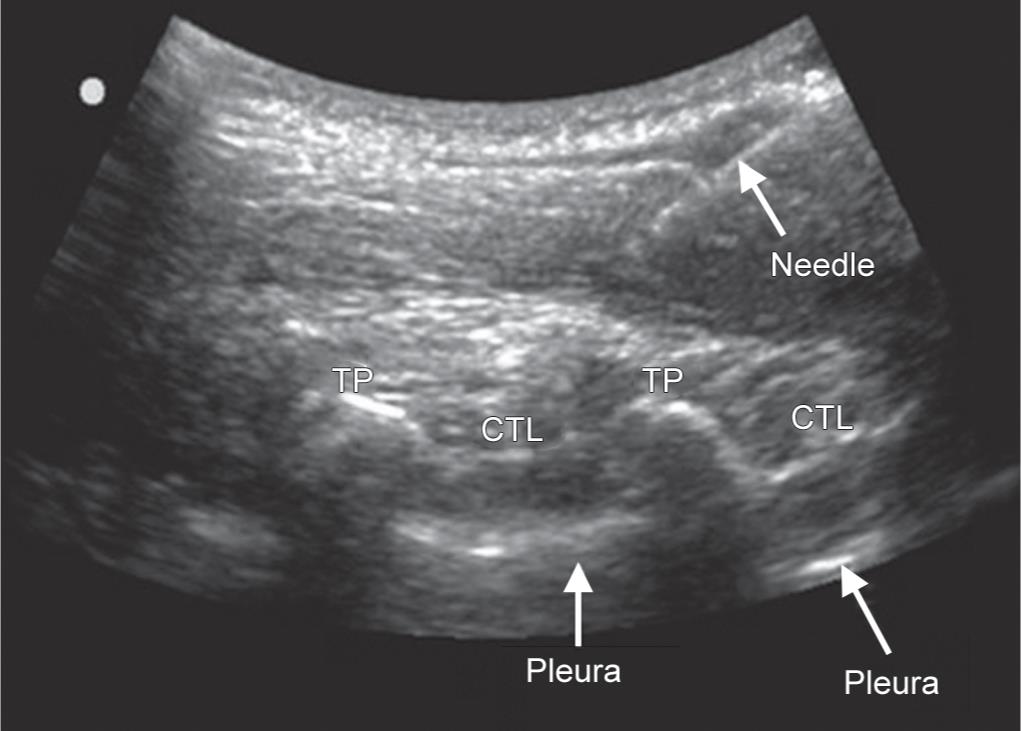 Our patient being a case of HOCM with severe LVOT required a technique with minimal hemodynamic alterations and avoidance of poly-pharmacy. In light of the specific requirements of the case, thoracic PVB was chosen over GA owing to its superior safety profile and stable hemodynamics. Thoracic PVB is also preferred over epidural anesthesia for patients with underlying disease as it offers more reliable anesthesia and stable hemodynamic response, and provides rapid recovery without nausea and vomiting, with preserved respiratory functions. 2 Paravertebral block has been found to have a lower rate of side effects and complications, apart from reportedly reducing the time for tumor recurrence. 2,3 According to the recent meta-analysis, PVB is a highly safe and efficacious technique and provides anesthesia and postoperative analgesia during breast surgery. 4 It is easy to learn and has a high success rate with decreased incidence of chronic postoperative pain after chemotherapy and surgery. Thus, considering the nature of cardiac involvement of our patient, our choice of thoracic PVB was ideally suited to the case. At present, ultrasound-guided techniques have been employed for further safe administration of this block.

It is reasonable to conclude that thoracic PVB is a safe and efficacious technique that provides good intraoperative hemodynamic stability and superior postoperative analgesia when compared with other conventional methods of anesthesia for breast surgery in HOCM patients.